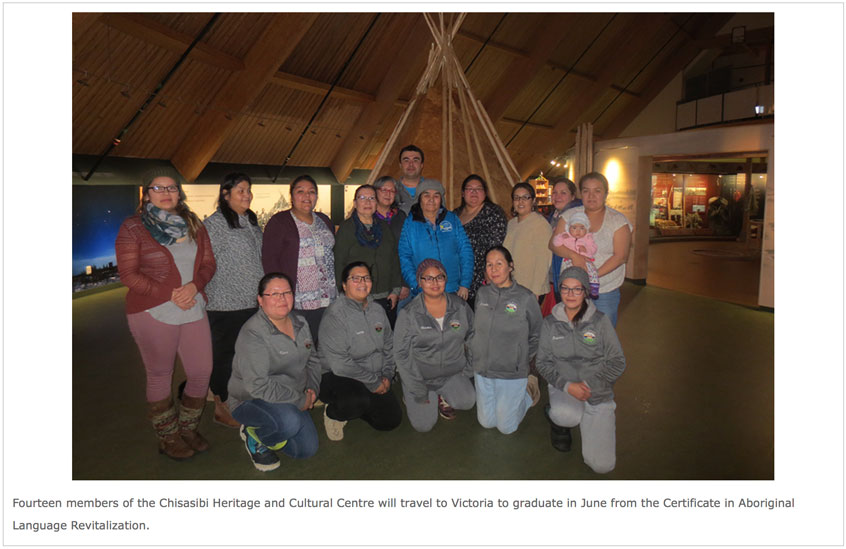 This article was originally published on the UVic website, June 4, 2018

Margaret Fireman understands that language upholds her culture. Without language, oral traditions and wisdom passed down from her Cree ancestors would be lost. Language, she says, is closely tied to the land.

And so when Fireman, a residential school survivor and then-manager of Chisasibi Heritage and Cultural Centre in northeastern Quebec, was searching for a program to bolster the preservation of her community’s language of James Bay Cree, she chose carefully.

Fireman turned to the University of Victoria’s Certificate in Aboriginal Language Revitalization (CALR) to support her workplace’s efforts to sustain the first language of Chisasibi’s nearly 4,600 members.

“We come from an oral tradition. The first exhibit we have is our language,” she says. “We felt it was really important in this line of work that you understand your own language first in order to properly interpret our story.”

The entire staff at the Chisasibi Heritage and Cultural Centre, all of whom speak James Bay Cree, enrolled in the CALR program, which teaches new approaches and practical strategies to strengthen language revitalization while honoring traditional knowledge and practices.

Next week, 14 of the graduating students will make the three-day journey to UVic, driving 16 hours from Chisasibi, on the edge of James Bay, to Ottawa, before boarding a flight to Victoria to attend convocation on June 12. The journey is more than geographical: it reflects the community’s determination to ensure their culture and language flourishes.

The CALR program has been offered in collaboration with communities as far away as the Northwest Territories. The program develops a range of skills and knowledge to support community-driven language reclamation, and is tailored to meet the needs and goals of each community.

Developed by UVic’s Department of Linguistics in partnership with the En’owkin Centre of the Okanagan Nation and UVic’s Continuing Studies, Chisasibi’s program included six courses taught in James Bay Cree. Instructors travelled to Chisasibi, meaning that all staff at the cultural centre were able to participate in the two-week intensive.

“We’ve had some evening and weekend sessions with elders and we talk about how we are losing our language. We’re very concerned,” she says. “This certificate program is really important to us.”

The issue of language survival resonates deeply for Fireman. Forced to attend residential schools and speak English as a child, Fireman later struggled to communicate with her parents and grandparents, who solely spoke Cree.

“The more I learned the English language, the more I lost my words,” she says. “I had to regain my language again.”

Rachelle Lafond, Chisasibi centre’s public relations and programming coordinator, said the CALR courses helped her understand the landscape of Indigenous language revitalization across Canada, particularly why some communities’ languages were surviving while others were diminishing.

Lafond says they learned about language dynamics from a linguist specializing in James Bay Cree. In another class, they had the chance to transcribe recordings from elders and turn them into educational resources.

“Ultimately the courses gave us skills on how to preserve our language,” Lafond says. “The time to do that is now.”

Lafond will be among the Chisasibi centre’s employees attending convocation. The centre is already discussing pilot projects to build on what they’ve learned during the certificate.

“It’s a proud moment,” Lafond says. “We need to celebrate it.”

CARL academic advisor Suzanne Urbanczyk, from the Department of Linguistics, says the university is thrilled to host the graduating group.

"We are excited and honoured that they are travelling from Chisasibi to be at the convocation."