This article was originally published in the August 2017 BC Society of Landscape Architects (BCSLA) Sitelines Magazine.  It has been reprinted with permission from the BCSLA and Dr. Valentin Schaefer.

Ecological restoration depends critically on context. In addition to the ecological perspective, ecological restoration in cities needs to consider social and political layers that have impact on a site as well. Context for the site design is critical for a project to endure. There is no single prescription for restoration. To really work, a design requires that we understand the layers of a site’s past history, current influences — both on- and off-site and future impacts. This process of understanding a site is sometimes called "listening" and encompasses ecological, social and political factors. The layered landscape approach acknowledges this complexity of a site and integrates ecological values with social and cultural values to create a more authentic approach to landscape architecture.

As an example, we can look at the University of Victoria campus. A case study of the layered landscape concept that was given in Restoring Layered Landscapes: History, Ecology and Culture, edited by Marion Hourdequin and David Havlick (2016), deals with the transformation of a former US Army Jefferson Proving Ground munitions testing area into the Big Oaks National Wildlife Refuge in Indiana. Historically, the University of Victoria was originally located at the current location of the Lansdowne Campus of Camosun College. The University of Victoria campus of today, like the Big Oaks National Wildlife Refuge, also has a military connection. It was established on 140 acres of land owned by the federal government and the Hudson’s Bay Company in 1963. The land was used as a military training base during WWII and still had 40 useful barracks on the site. Unlike the Jefferson Proving Ground, however, there was no issue with heavy metals in the soil from munitions. On the other hand, similar to the Jefferson example that had a wildlife layer that involved Burrowing Owls, the university campus had a breeding colony of Skylarks (Alauda arvensis) which, although an introduced species, was well loved and the subject of student protests when their habitat was slated to be destroyed to construct the David Strong Building. Habitat loss is also part of Crime Prevention Through Environmental Design (CPTED), where some habitat in the Cunningham Woods may soon be lost due to safety concerns identified in the 2017 update of the University’s Campus Plan. 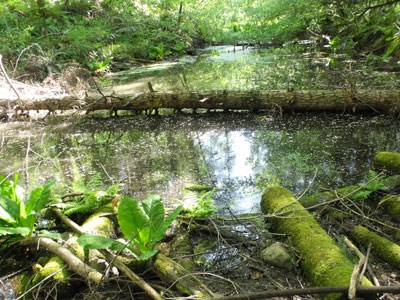 The military connection in the University's past is still evident in the name "Canoe Pond" for a small isolated wetland in a large ravine on campus known as Mystic Vale. As you cannot canoe to or from the pond on Hobbs Creek, the name is a puzzle to many people; however, it was used as a training area for the army to teach canoeing. Mystic Vale and Hobbs Creek today are excellent examples of layered landscapes and competing uses. Hobbs Creek receives the drainage from a large storm drain in Oak Bay that subjects the creek to the typical floods and droughts common in urban creeks with large areas of impervious surface in their watersheds. The erosion of the banks and the siltation of the creek are so serious that the university developed a Hobbs Creek – Mystic Vale five-year restoration plan, last updated in 2009. However, the issues the plan identifies can only be addressed with limited success in the in-stream environment because restoration efforts such as wattles to stabilize the banks and weirs in the creek to trap sediment are overwhelmed by floodwaters. The University has created rain gardens in the watershed on campus to help with the problem of stream flow and has installed page wire fencing around Canoe Pond to keep uncontrolled off-leash dogs from running into the water contributing to siltation, but the solution requires a much broader watershed scale approach that needs to include urban planning measures within the City of Oak Bay.