Celebrating community in the classroom

The video opens with a shot of the UVic sign, followed by clips of the Continuing Studies Building. An image of different national flags with the words "we are one" appears, mirroring the lyrics of the song playing in the background.

April chose "We Are One" as the background song for the video because she felt the words were fitting for the atmosphere in the class. "We are different nationalities," April says, but despite being from different countries, the students were all one team in the classroom.

Since April is passionate about making videos, compiling photos and clips from her time in BMBA100 felt like the perfect way to mark the end of the class. April says it was her way of "celebrating the success of the course."

The introductory course gives students an overview of various aspects of business, including marketing, finance and management. In addition to the technical skills, April says the most valuable parts of the class were the discussions. Talking to her classmates of different backgrounds helped April to broaden her perspective and learn about other cultures. Both the group and individual discussions were fun learning experiences, she says. 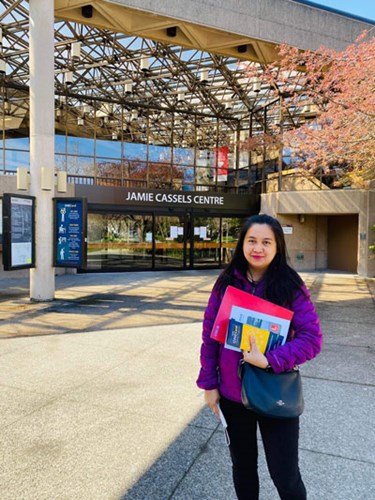 Improving her communication skills has helped April step outside of her comfort zone. "I am not shy anymore, and I can communicate without any barriers," she says. The welcoming atmosphere in the class and overall at Continuing Studies had a hand in helping her come out of her shell, and she hopes her newfound confidence will help her career.

The collaborative atmosphere of the class shows through in April's video. In the photos of her class, students gather around the whiteboard laughing, having fun and learning together. April says the video made her classmates and professor very happy, and she hopes to make videos for each of the classes she takes in the future.

"I touched their lives," April says. "When you watch the video, it will touch your heart because the different nationalities become one."