The Fish Sound Project: Unraveling the Identity of Fish Sounds in British Columbia

Some fish produce sounds to find mates, defend their territory, or keep cohesion within their group. These sounds can be used to detect the presence and potentially the number of fish in an environment, over large areas and long time periods. However, many fish sounds have not yet been associated to specific species, which limits the usefulness of this approach. The work presented here aims to address this knowledge gap in British Columbia. A new video/acoustic instrument array, composed of 6 hydrophones and 2 cameras, has been developed and deployed at various locations off Vancouver Island to identify fish sounds that have not been documented before. In this presentation Xavier Mouy will provide background on fish sounds and sound-production mechanisms, describe the approach used to identify fish sounds in British Columbia, and discuss how these results can be potentially used to monitor marine protected areas in BC. 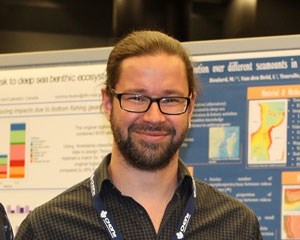 Xavier Mouy is a PhD candidate in the School of Earth and Ocean Sciences at UVic and an acoustician at JASCO Applied Sciences in Victoria. He received a B.Sc. in Acoustics, Signal Processing, and Vibration at the University of Le Mans, France, and a M.Sc. in Oceanography at the University of Quebec in Rimouski, Canada. He is interested in everything that produces sound in the ocean including, but not limited to, whales, seals, walruses and fish. For his PhD at UVic, Xavier is working on a way to monitor fish populations non-intrusively, just by listening to the sounds they produce in the ocean.