Melia Belli Bose discusses best-known contemporary Bangladeshi artist globally, Tayeba Begum Lipi (b. 1969), who has exhibited in group and solo shows at elite venues such as the Venice Biennale and Art Basel. Love Bed, her life-sized sculpture of a double bed fashioned from stainless steel razorblades, is in the permanent collection of the Solomon R. Guggenheim Museum, one of the foremost modern art institutions in the world. Characteristic of Lipi’s work, Love Bed and its medium are fraught with convoluted semiotics. The sculpture exposes paradoxes in rural Bangladeshi women’s lives; the bed of razors is seductive and eerily inviting, yet, by virtue of the material’s potential to inflict pain and even death—dangerous. Together with tiny golden safety pins, razorblades are synecdoches tethered to key events in the artist’s early childhood and young adult life.

For over a decade Lipi has created dozens of sculptures of feminine domestic objects—sewing machines, handbags, stilettos, bikinis, baby strollers, and a marriage bed—out of razorblades and safety pins to interrogate issues of gender inequality, agency, marginality, and structural violence that inform the quotidian realities of lower and middle-class women in her country. Lipi also draws from her own intimate and often painful gendered experiences in her art, sharing topics with her viewers that in Bangladeshi society are often regarded as taboo. In so doing, she has established herself as one of a handful of brazenly outspoken, politically engaged Bangladeshi women artists, who whose work holds a mirror to their society and advocates changes such as improved women’s education and healthcare. 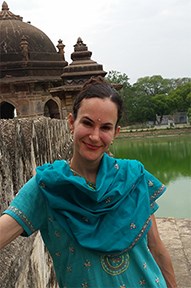 Dr. Melia Belli Bose is Associate Professor of South Asian Art History at the University of Victoria, Canada. Her research focuses on issues of death, memorialization, gender, and public identity in the early modern courtly and contemporary art and architecture of north India, Pakistan, and Bangladesh. Her publications include Royal Umbrellas of Stone: Memory, Political Propaganda, and Public Identity in Rajput Funerary Art (Brill, 2015). She is also editor of a special edition of Ars Orientalis dedicated to the arts of death in Asia (2014), Women, Gender, and Art in Asia (ca. 1500-1900) (Routledge, 2016); Intersections: Art and Islamic Cosmopolitanism (University Press of Florida, 2021); and the in-progress volume, Gendered Threads of Globalization: 20th c. Textile Crossings in Asia.