"Laying Down a Sovereign": How the British Press Reported on Queen Victoria’s First Pregnancy

It is a truism that the Victorians were prudish about pregnant bodies. Our lecture questions this assumption through a case study of Queen Victoria’s very public pregnancy with her first child. We track discussions of Victoria’s pregnancy from mere weeks after her marriage in February 1840 to Princess Victoria’s birth in November 1840. During this period, Victoria’s pregnant body was subject to considerable scrutiny from the national press, ranging from gossip about her possible pregnancy less than a month after her marriage to scurrilous comments about her sex life. 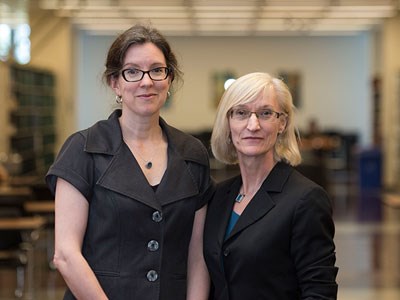 Drs. Leighton and Surridge are both professors in the Department of English at UVic, specializing in Victorian literature and periodicals. They have co-edited The Broadview Anthology of Victorian Prose 1832-1901 and Victorian Review (2006-16), they are co-authors of The Plot Thickens: Illustrated Victorian Serial Fiction from Dickens to Du Maurier (2019), and they have co-published numerous book chapters and articles. Their new project focusses on the representation of pregnancy in Victorian novels and the public press.