Racism, Rights, and Empire in the Dominion of Canada: The Case of the Komagata Maru

Through the lens of the Komagata Maru episode we examine the experience of law and justice of a British colonial population that had chosen to remove itself from its country of origin, India, closely controlled by the colonial government, to another British possession, Canada, that enjoyed extensive self-government and was organized as a federal state. We examine their assumptions about what was possible by invoking both imperial citizenship and Canadian law to protect and facilitate the landing of the passengers who were British subjects, as well as the actual state of Canadian law on immigration, citizenship, and constitutional and civil rights during this period.

Some further questions we consider are: What part did the Canadian legal advisers to the Indian community in Vancouver and the passengers play in contributing to the belief that Canadian law might assist them? How did the experience of the Komagatu Maru’s passengers and their ultimate fate play out in terms of the experience of those of Indian heritage in both Canada and India? 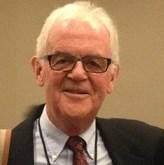 John McLaren is an emeritus Professor of Law at the University of Victoria. Interested in both Canadian and comparative colonial legal history, he has researched and written on legalized discrimination against racialized and ethnic minorities, especially Chinese immigrants and the Doukhobors, on the rule of law, and on the British colonial judiciary, and most recently (with Professor Parmar) on BC lawyers in the early 20th century who represented "unpopular causes" (labour, Indian migrants and suspected "Bolsheviks").

Pooja Parmar is an Associate Professor at the University of Victoria Faculty of Law. Her current research focuses on the legal profession, and she is currently involved in projects on the history of the profession in BC, as well as contemporary conceptions of ethical lawyering and professional responsibility in multi-juridical spaces like Canada. In her published research she has examined aspects of oral history, legal pluralism and Indigeneity, the role of lawyers as translators across legal worlds and intersections of law and colonialism.