Singing to Fight the Stigma and Social Isolation of Dementia

This article was originally published by The Ring, April 25, 2018. 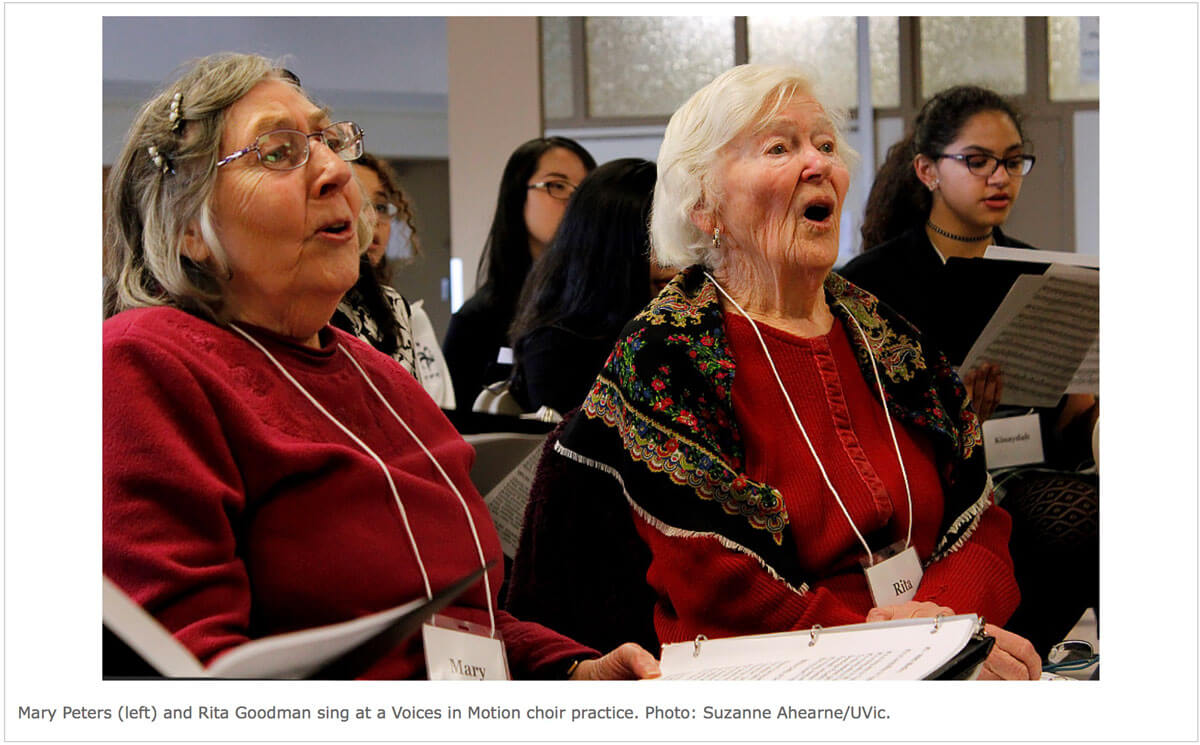 Rita Goodman was nine or ten years old when she first started singing songs about bluebirds flying over the white cliffs of Dover and the long, long road to Tipperary. Then, she was being led in song by nuns in the basement of their Liverpool orphanage to drown out the sounds of the German Luftwaffe strafing the British port city during the early years of the Second World War.

Now, she's 88 and singing in the basement hall of St. Joseph's church in Victoria along with her daughter and about 30 others. And when she sings a medley of some of the British morale-boosting songs made famous by Vera Lynn, her memories of those war years are as vivid as they ever were. Goodman says her short-term recall of events of the last few days can be pretty sketchy. Her daughter Anne helps her fill in the blanks a lot.

Goodman is part of "Voices in Motion," an intergenerational community choir for persons with dementia, their family caregivers and high school students.

"Voices in Motion" is also a University of Victoria research study led by Debra Sheets (nursing) and fellow research affiliates of UVic's Institute on Aging and Lifelong Health—Stuart MacDonald (psychology) and Andre Smith (sociology)—along with Mary Kennedy (music) and Carl Asche (economics) at the University of Illinois College of Medicine at Peoria. They’re coming to the end of the first 14-week pilot phase of a two-year study looking into how participation in an intergenerational choir might foster social engagement and caregiver well-being, improve quality of life for persons with dementia, and reduce some of the stigma surrounding memory loss.

Goodman was sitting beside St. Andrew’s Regional High School student Chanel Mandap when choral director Erica Phare-Berg asked choir members to chat with their neighbours for a few minutes after singing the medley. She tells Mandap about the nightly ritual of little girls in nightgowns being trotted downstairs to sleep in the basement during air raids and the storage shelves they converted into makeshift beds.

“We sang our hearts out as the bombs were falling,” Goodman tells her, and they both laugh. Mandap tells her she’s never heard anything like this in her history classes and hadn’t heard the songs before she joined the choir.

“Do you ever get homesick from singing?” asks Goodman, who worked as a registered nurse in Britain and Canada and sang in the UVic Chorus for nearly 40 years. Mandap thinks about the question for a while, then says no, but sometimes her mum might because she comes from the Philippines.

This kind of knowledge-sharing doesn’t come as a surprise to Sheets. “Intergenerational choirs are really magical,” she says after one of the practices. “People tend to associate with people their own age. For older adults to be around younger people who have a lot of good energy, and for younger people to be around older people when maybe they don't live near their grandparents, they can develop relationships with them and care about them.”

This is going to be especially important, she points out, in a population where the number of older adults is going to double in the next 15 years.

A unique choir for people living with dementia

There have been a few small studies on choirs for people living with dementia, but Sheets says that to date they have been primarily qualitative and largely just asked participants about their experience of the choir without tapping into the impact on their lives and relationships. This choir is also unique in involving high school students as well as caregivers.

“More rigorous research is really important,” says Sheets, because although choirs are a relatively inexpensive intervention, they’re not without expense: they require a choir director, piano accompanist, a place to rehearse and other supports. “To gain wider public support for dementia-friendly choirs, we need stronger evidence that this can significantly improve people's health and well-being,” she says.

To gather the necessary data, participant pairs—a person with early- to moderate-stage dementia and a family caregiver who’s most often a spouse or child—go through four assessments as part of the 14-week study. They’re doing rigorous cognitive, neuropsychological and physiological assessments.

Alison Darnley is a fourth-year honours psychology student who’s volunteering with the project to do some of the physiological tests measuring gait on a special pressure-sensitive mat. She wanted to add to the research she’s doing with Stuart MacDonald exploring gait as a marker of cognitive decline. The idea is to identify people early on who may benefit from interventions to slow down the trajectory of decline.

Mary Kennedy, emeritus UVic music professor, is leading the high school students survey portion of the study asking about their attitudes and knowledge about dementia before and at the end of the project.

Frank Peters and his wife Mary Peters plan to continue when the project is expanded in September to run two choirs concurrently. Music and dancing have always been a big part of their lives but they had to stop their old time English dancing a year or so ago when Mary found it too hard to remember the patterns. And Frank had to stop attending the Victoria Male Voice Choir after 25 years because it took him away from home for too long. He’s hoping that the choir will diminish Alzheimer’s impact on them as a couple.

Sociologist André Smith is working with graduate student researchers to do in-home interviews with participant pairs about the choir’s impact on social networks and the relationship between persons with dementia, their caregivers and the student.

Researchers hope that the project’s findings and tools will allow other organizations to replicate best practices and measure the impact of a choir on social connections, caregiver burden and stress, social networks.

“Our goal,” says Sheets, “is to offer an opportunity to participate in a meaningful and supportive activity in which having dementia is not the focus. It’s not about staying busy and filling time. It’s about doing something that leaves you feeling uplifted and which offers opportunities to learn by being part of a community that values your voice and what you’re contributing to the group.”

“I think if we can have an impact on quality of life here for both the caregiver and care recipient so that both experience the potential for learning and creating new social connections with others that reduces stigma and isolation than this is a great contribution,” says Sheets.”

The project is funded by the Alzheimer’s Society Research Program and Pacific Alzheimer Research Foundation. Island Health is the project’s community collaborator.

If you or someone you know are interested in experiencing the therapeutic benefits that music can bring to our lives, be sure to check out Continuing Studies at UVic's current singing course offerings.