The long journey from head to heart

Olav Krigolson is a neuroscientist and UVic professor, and one of our most popular instructors at Continuing Studies. In the four years he's been teaching with us, he's taught 22 courses with over 880 registrations.

When asked why he's interested in teaching with Continuing Studies, he replied, "On an altruistic level, part of science is disseminating your results, and we have to do that to more than just the journals or the academic audiences."

"But part of it's personal. I love teaching. And I like teaching what I love. I love sharing my passion for neuroscience and in Continuing Studies, it’s cool because I've taught courses that are more about my day job but I’ve also taught courses on my passion projects, different journeys I've been on and such, so it’s cool to be able to share that." He also appreciates the access to lifelong learning that Continuing Studies offers in the community because he himself didn’t follow a traditional path to academia.

"I was in the army for three years out of high school and that led me to UVic where I did an undergraduate degree in education with a double major in physics and physical education (which in itself is sort of a weird combination)," he laughs. "Phys Ed because I was a basketball player and I loved sport and I wanted to be a coach, and Physics because I was told by a counsellor that it would get me a job."

And then, "It was spring break and I was sitting in a train station in Venice, Italy with a bottle of wine and a baguette and I was thinking about what to do next in life and I remembered this conversation I'd had with a prof about grad school back when I was an undergrad, and I thought, 'that would maybe be kind of cool.' So I googled 'best kinesiology graduate programs in North America' and it came back with Indiana. I was a huge basketball nut, so I applied on a lark, and I got a letter back offering me a full ride to Indiana to do a Masters in Science in Motor Learning and Control. It was during that time when I sort of switched focus. When I went there, I thought I was going to be a basketball coach, just get my graduate degree and teach at a college or something but then I took an elective course in neuroscience and I was just hooked, I’d found what I was really interested in."

Olav at the Nosa Señora da Barca church in Muxía, Spain during his pilgrimage on the Camino de Santiago.

But to pursue that, he realized that Indiana wasn't really the place to be. "It turned out that my old home university, UVic, had just hired a guy by the name of Clay Holroyd who was a leading edge neuroscientist in the neuroscience of human learning. So I ended up turning down a PhD opportunity at Oxford to come back to Victoria, partly for personal reasons, and I did my PhD here and it was awesome."

He then went on to do post-doc work in medical neural imaging at UBC before accepting a position in cognitive neuroscience at Dalhousie. "So I was a professor at Dalhousie in Psychology and Neuroscience for four years, and then a position opened up at UVic with a lot of opportunity so I came home. At least that’s the official reason. Personally, I have a young son who was living here with his mom and it was hard seeing him only every six weeks so as soon as the job opened up, I took it and came home to be with him. And it’s great. I’ve been here four years now and it’s worked out well. I’m now the associate director for the Centre of Bio-Medical Research here and my lab is flourishing. And obviously it’s not a bad place to live and my 10-year-old is only about 1km away and I see him every day now."

"But it wasn't a straight path to my PhD, I had some adventures along the way… Like that time I walked across Spain… that definitely changed my life!"

Olav has actually walked the Camino de Santiago, a walking pilgrimage through Spain, twice. “The first time I did it I was in a really weird place. It was just after my divorce and my son was in Victoria and I didn't know what was going on and I watched this movie called "The Way" and said 'that’s what I’m going to do.' Two weeks later I was in Portugal starting the Camino de Santiago as the least prepared pilgrim in the history of mankind." 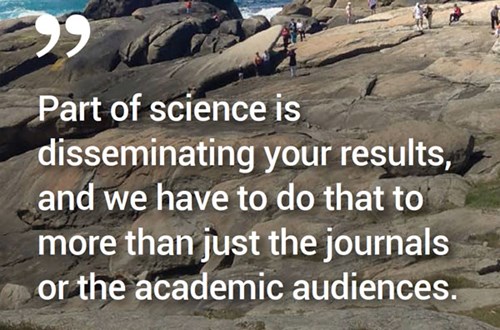 He ended up walking for 15 days (in a pair of Birkenstocks) and says it definitely helped him sort out a lot of the stuff he was thinking about at the time. “I came back to Victoria to visit my son then went camping with a buddy of mine and was telling him about my trip and he said, 'well we should go do the French route, walk across all of Spain!' I said, ‘Sure buddy, you get the time off and we’ll do it,’ not really taking it seriously.”

"Sure enough, in January, I get a phone call from him saying he had taken 6 weeks off work so by the next summer, less than a year after finishing the first route, I found myself in Saint Jean [Pied de Port, France] walking across Spain again," this time from the other direction.

For Olav, it was a personal journey. "When I started the first trip, my focus and my thoughts were all on my career and by the end I realized that it was just a job, and what really mattered was my son, and that I needed to come back home and be a dad. So it changed my life a lot and helped me re-prioritize. I mean, when else in your life do you have like eight hours a day to just think, for like 30 days in a row? It's like walking meditation. It's just time to really think about things."

And for a neuroscientist, who is passionate about how people think and learn, it doesn’t get much better than that.