A legacy of optimism

Known for his quick wit, and his love of language and music, Didier Bergeret was one of the kindest, most compassionate souls you would ever have the pleasure to meet. You couldn’t help but be drawn to his selfless nature and big boisterous personality, one that always seemed to fall on the side of optimism. Didier joined the University of Victoria's Division of Continuing Studies as a French language instructor in 1987, and he remained a steadfast and constant figure throughout the next 29 years. 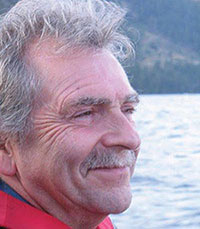 Sadly, it’s been nearly a year now since we lost Didier. He passed away peacefully on Friday, Dec. 16, 2016, following six months of illness. But as the one year anniversary approaches, as we remember and honour Didier, it is no surprise that his optimism has now left a legacy—one that will greatly benefit hard-working undergraduate students for years to come. A scholarship has been set up in his name through the UVic French Department and will be awarded to those who have the same passion for the French language and culture as Didier did.

The idea to create an endowment—a scholarship that is generated by the capital’s interest only—was developed by Marc Lapprand, Chair of the French Department and close friend of Didier's. In order to create the endowment scholarship, an anonymous UVic donor would match the final donation amount only once $25,000 was raised, which would then create a $50,000 endowment.

Once word got out that a scholarship was being developed in Didier’s name, donations began to pour in. “Well over 150 people donated, from former students and colleagues, [to Didier’s] friends and family across Canada and his home country of France,” explains Lapprand.

“My development officer has never seen such an amount raised so quickly. The threshold for it to become an endowment was $25,000. We reached and surpassed that bar on Sept. 25, just one month after we started. I am told that it normally takes six to eight months to collect that amount. It worked so well because Didier was a respected and beloved individual. He was a real gentleman, missed by all those who had the privilege of knowing him or working with him.”

The final endowment amount, after matching, came to $90,040, which will generate roughly $3,600 each year, to be distributed in scholarships between two to three French students.

It’s an impressive legacy to say the least, but more importantly, somehow Didier continues to spread his optimism even from the other side.